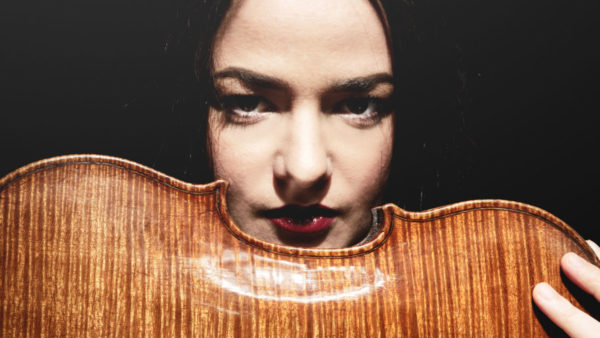 She is an excellent player […] it’s great to see such young talent.
Julian Rachlin for the ‘Jerusalem Post’

Anna was born in Moscow into a musical surrounding that is deeply rooted in the string playing traditions passed by David Oistrakh (Viktor Pikaizin & Semyon Snitkovsky), Mikhail Garlicky, Zinaida Gilels and the original Borodin Quartet members. She began her violin studies at an extremely young age with her mother Elena Mazor and from the age of 5 with Prof. Irina Svetlova in Tel-Aviv.

Anna’s first performance with orchestra was at the age of six.
Besides her frequent performances in Israel, she often traveled to international festivals such as Vladimir Spivakov’s Moscow Meets Friends, Natalya Gutman’s (Oleg Kagan) Festival in Kreuth in Germany, Portogruaro Festival and Lucca Festival in Italy, Miyazaki festival in Japan, Brandenburgische Sommerkonzerte in Germany, Gaia Festival in Switzerland, Viana Festival in Portugal and Eilat Festival in Israel collaborating with musicians such as Peter Donohoe, Pavel Gililov, Julian Rachlin, Maxim Vengerov, Natalia Gutman, Stacey Watton, Pinchas Zukerman and many more.
Radio performances with the Jerusalem Symphony Orchestra, National Chamber Orchestra of Moldova, Symphony Orchestra of Chisinau as well as Sinfonietta Baden and other smaller groups followed.

At the age of 16, a debut performance with the Israeli Philharmonic Orchestra under the button of Zubin Mehta lead to Anna’s moving to Europe to study with Pavel Vernikov at the Vienna Conservatory, where she became a prize winner of four International Competitions.

Our performance of the Franck was really memorable!
Peter Donohoe (about his performance with Anna)

Anna lives today in the Netherlands with her husband, the cellist Gavriel Lipkind.
Despite her soloist’s activity and background, she shares a deep passion for chamber music with trusted partners and rapidly evolves as a performer of contemporary music.
A member of the internationally acclaimed Lipkind Quartet Anna was also a co-producer of the ‘Lipkind plays…’ series and a founding member of the TRPTK Trio where she plays with the cellist Maya Fridman and the pianist Nadezhda Filippova.
Anna plays a 1781 Gagliano violin (the „Martelenne“) thanks to the generous support of R & v.T.