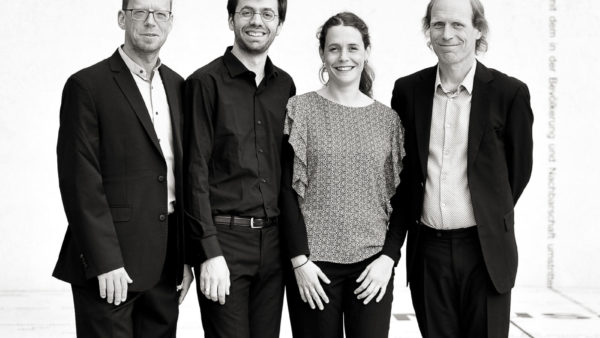 The ensemble AUX PIEDS DU ROY was founded in 2005 by Dirk Börner and Michael Form with the aim of devoting themselves intensively to the research and interpretation of French chamber music around 1700. The old French pied is a unit of measurement that was used, among other purposes, to determine different pendulum lengths, from which very precise musical tempi could be derived. The pendulum or chronomètre was the baroque forerunner of the classical metronome and has been used especially in French treatises of the late 17th and 18th century in oder to determine exact tempi of dance characters.

The preposition aux of the ensemble’s name is to be understood as a winking allusion to the fact that in the famous concerts d’appartement of Louis’ XIV the royal chamber musicians played so to say at the feet of the monarch. In addition, the Roy du Soleil himself was known to be one oft he best dancers in his kingdom.

In 2007, a large scale research project entitled «Vers une nouvelle plasticité du rhythme» supported by the Bern University of Arts (Switzerland) enabled a profound study of the interaction of music and belle danse during the French baroque era. The artistic result is an award-winning CD recording of the Pièces en trio by Marin Marais which has been released by Ambronay Editions and Harmonia Mundi France. From 2008 on, the ensemble has followed numerous invitations to perform at Salle Gaveau and Bibliothèque Nationale in Paris, at the festival Winter in Schwetzingen, the Innsbruck Festival of Early Music and other important venues in France and Italy. After Michael Form and Dirk Börner were awarded a Diapason d’Or for their CD «Bach Remixed» in 2013, both musicians are developing together with AUX PIEDS DU ROY a series of ambitious programs with chamber music by Johann Sebastian Bach of which their recent album “Speculation on J.S. Bach” has received an other Diapason d’Or in February 2019.