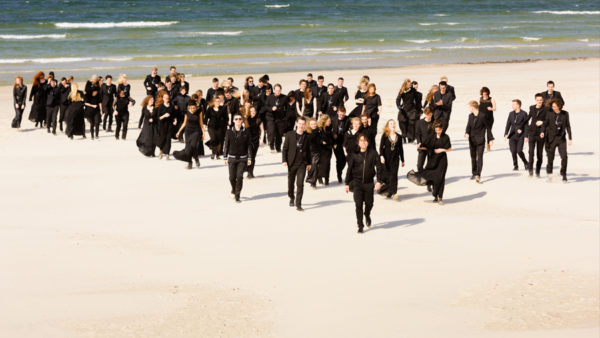 The Baltic Sea Philharmonic takes the concert experience to a new dimension. Every performance is a voyage of musical discovery, as the musicians perform the entire programme from memory, creating a one-of-a-kind artistic journey. Each concert is a unique spectacle of sound, light, visual art and technology, and under the electrifying baton of Music Director and Founding Conductor Kristjan Järvi every performance has a special energy that’s absolutely infectious. But even more than this, as a community of musicians from ten Nordic countries, the Baltic Sea Philharmonic transcends geographical and historical boundaries and has become a movement for bringing people together. Embodying all that is innovative and progressive about the Nordic region, this visionary ensemble is taking the traditional orchestral model further than ever before. ‘It is a living breathing creature, with boundless energy and enthusiasm for the new – an adventure in itself’, says Kristjan Järvi.

The orchestra’s story began in 2008 on the resort island of Usedom, off the northern edge of Germany. Thomas Hummel, the Director of the Usedom Music Festival, wanted to create a new multinational ensemble, and took the idea to Nord Stream AG, operator of the natural gas pipeline through the Baltic Sea. His proposal: what better way to reflect the cooperation between Baltic Sea nations than by bringing together the best young musicians from Denmark, Estonia, Finland, Germany, Latvia, Lithuania, Norway, Poland, Russia and Sweden.

‘Right from the first concert of the newly inaugurated Baltic Sea Youth Philharmonic, in Riga in June 2008, it was clear that here was an orchestra with a powerful message’, says Hummel. Audiences felt it immediately, and politicians recognised its importance too. The musicians of the orchestra knew they had a special opportunity: not only were they part of a new, vibrant international community, but they also got to work with Kristjan Järvi, one of the most charismatic conductors in the business. In the Estonian-born Järvi, the Baltic Sea Youth Philharmonic had a leader with the energy and vision to realise its international ambitions. A curator and creator of genre-fusing projects and festivals around the world, Järvi instilled in the musicians a curiosity for new musical experiences, an entrepreneurial spirit and a zest for creative thinking.

The increasing international importance of the orchestra was matched by the growth of its educational ambitions. Education and training have always been at the heart of the orchestra’s mission, and Järvi, together with a team of international coaches, has worked intensively with the musicians to develop their professional skills and expand their musical horizons, especially in the area of memorised performance. The creation in 2013 of the Baltic Sea Music Education Foundation consolidated a burgeoning education programme, which included chamber music coaching as well as workshops for young conductors and composers, and special concerts for school students.

In 2016 the orchestra was renamed the Baltic Sea Philharmonic. It has since been a regular fixture at such renowned venues as the Elbphilharmonie in Hamburg and the Berlin Philharmonie, touring innovative programmes that throw classical music conventions out of the window and enable audiences and the musicians alike to experience new musical dimensions. The groundbreaking ‘Waterworks’ (2017/18), in collaboration with Sunbeam Productions, fused music, light, sound design, visual art and fashion to spectacular effect, and brought the ensemble in November 2018 to concerts in Dubai and Abu Dhabi in the United Arab Emirates. ‘Baltic Folk’ (2017) featured the first ever memorised performance of Stravinsky’s The Firebird. With ‘Nordic Pulse’ (2018/19), the Baltic Sea Philharmonic celebrated both its tenth anniversary and 100 years of independence for Finland, the Baltic States and Poland. ‘Midnight Sun’ (2019) introduced a new model of performing the complete programme not just from memory but also without breaks or intermission, thus creating a seamless flow of music. ‘Divine Geometry’ (2019) brought together Baroque and minimalism, and included the German premiere of Steve Reich’s Music for Ensemble and Orchestra, a work co-comissioned by the Baltic Sea Philharmonic together with the New York Philharmonic, the Los Angeles Philharmonic, the San Francisco Symphony, the London Symphony Orchestra and the Sydney Symphony Orchestra.  By the end of 2019, the Baltic Sea Philharmonic had given a total of over 110 concerts since its inception in 2008, performing to more than 130,000 concert goers in 16 countries (the ten Baltic Sea states, Austria, Hungary, Italy, France, Switzerland and the UAE).

2020 began with an exciting collaboration with British indie rock band Bastille at Hamburg’s Elbphilharmonie on 4 January for ‘Channel Aid’. Further unique online music projects called ‘Music for Peace’ and ‘Musical Chain’ followed. With ‘Musical Chain’ the Baltic Sea Philharmonic brings together musicians from across Europe in a new kind of virtual orchestra collaboration as a symbol of unity and solidarity in the face of the COVID-19 pandemic. Releases of the ‘Musical Chain’ series are available on the Baltic Sea Philharmonic social media channels. The orchestra will be back on stage in September with ‘Nordic Pulse’ for concert experiences at the Merano Music Festival (Italy) and the Usedom Music Festival (Germany).