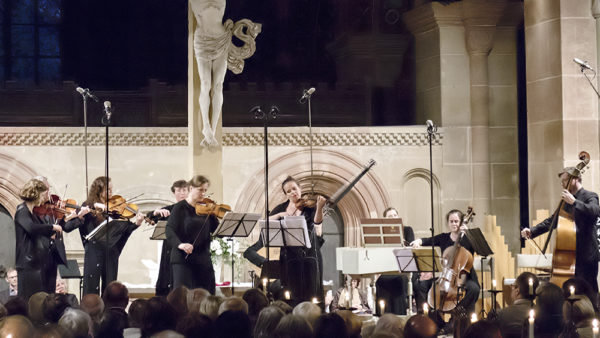 Lautten Compagney is an instrumental ensemble based in Berlin, Germany. Founded in 1984 by Hans-Werner Apel and Wolfgang Katschner, now the principal conductor, it specialises in Early music and Baroque music, notably the operas of Handel.

Lautten Compagney was founded in 1984 as a lute duo by lutenists Hans-Werner Apel and Wolfgang Katschner. The ensemble grew and plays in varied formation, specialising in Early music and Baroque music, notably the operas of Handel. Katschner is the principal conductor, Abel plays in the continuo group. Twice a year the group runs a festival, AEQUINOX, in Neuruppin.

The ensemble has frequently played choral works in concert and recording, collaborating with notable singers and ensembles. In varied formation from chamber ensemble to opera orchestra, they performed with vocal ensemble Capella Angelica, also founded by Katschner, and the Sing-Akademie zu Berlin, works including Handel’s Der Messias and Bach’s Passions. In 2007 they recorded cantatas by Dieterich Buxtehude. In 2010 they performed Bach’s Köthener Trauermusik in the reconstruction by Alexander Ferdinand Grychtolik in the Sophienkirche Berlin. In 2011 they played Handel’s opera Rinaldo, 300 years after its premiere, with Valer Barna-Sabadus in the title role. In 2012 they performed Handel’s oratorio La resurrezione, staged by Kobie van Rensburg, and Bach’s Christmas Oratorio.  For the Rheingau Musik Festival’s annual Marienvesper at Eberbach Abbey, they performed Monteverdi’s Vespers in 2013 with ensemble amarcord and five additional guest singers.

In December 2015 the European Broadcasting Union included the Lautten Compagney in its annual Christmas radio programme, which is broadcast across various European countries. The group played a selection of music from the Bach cantatas in instrumental arrangements.