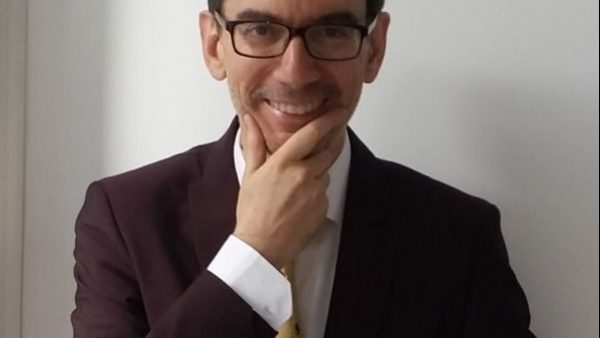 Manuel Martínez Burgos (Madrid, 1970) followed his primary and secondary studies at the British institution Kensington School and his music studies in his hometown at the Royal Conservatory of Music. He obtained five degrees in Composition, Orchestra Conducting, Guitar, Pedagogy and Musicology as well as the Graduation Prize Jacinto Guerrero Foundation (1996). He later broaden his training in Germany at the International Courses of New Music (Darmstadt) with K. Stockhausen, W. Rihm and K. Huber, in New York, with Milton Babbitt and in Paris, where he attended the IRCAM courses – Centre Pompidou.

He holds a Ph.D. in History and Music from the Autonomous University of Madrid (2004), where he obtained the Extraordinary Doctorate Award for his thesis on the composition technique of Isaac Albéniz. Martinez Burgos also published the first revised edition of the Catalan composer posthumous work, Azulejos, edited in 2005. He was awarded a second doctorate at the University of Oxford (2020) for his research into the usage of prosody as a resource in music composition.

Having obtained 20 national and international distinctions, Martínez Burgos is the most awarded Spanish composer of his generation. He has been awarded the following first prizes in international composition contests:

His works have been performed by prestigious ensembles, such as the Oxford Philharmonic, National Orchestra of Spain, the Radio Spanish Television Orchestra, the Seoul Philharmonic Orchestra (Korea), the Arthur Rubinstein Philharmonic (Poland), the Kymi Sinfonietta (Finland), the LIM and Enigma groups, the soloists of the Madrid Symphony Orchestra, or the Studio for New Music of Moscow. His compositions have been recorded by the RTVE label and the BBVA Foundation label.

Martinez Burgos’ interest in the study of different languages and, in particular, in classical languages, leads him to study Philology at the National Distance University (UNED). Prosody and communication are thus recurring themes in his aesthetic universe.

From a very young age he has combined his compositional activities with his teaching and research work. In 2001 he was selected in Spain as number one of the competition for conservatory teachers in the specialty of Composition Fundamentals. From 2001 to 2016 he has been professor at the Royal Higher Conservatory of Madrid, an institution where has also been assistant director for three years. In 2017 he obtains the position of chairman in composition at the Higher Conservatory of Music of the Principality of Asturias (Spain). He has given lectures in prestigious musical institutions such as the Sibelius Academy in Helsinki, the Chopin University in Warsaw, or the Tchaikovsky Conservatory in Moscow. He has also been Erasmus professor at the National Higher Conservatory of Paris (CNSMD), visiting scholar at the University of Cambridge and is currently tutor in composition at the University of Oxford (St Anne’s College).

One of the greatest successes of Martínez Burgos in the UK was the orchestral composition commissioned by the Oxford Philharmonia to commemorate the 500th anniversary of Leonardo da Vinci.