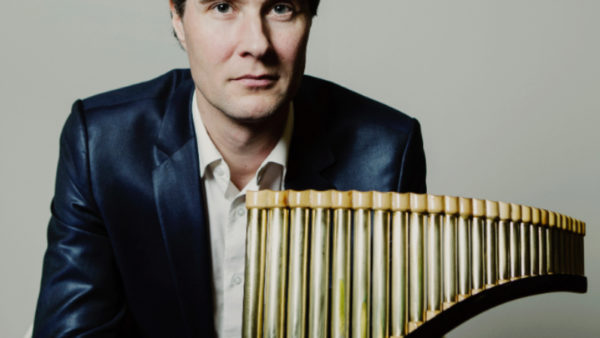 Matthijs Koene (1977) is internationally regarded as the most prominent pan flute player of his time. Matthijs is groundbreaking; his vision and way of playing have increased the technical possibilities and expression of the pan flute. This has enabled the pan flute to make its entry into classical music.

He knows how to convince a composer to write a work for pan flute. To date more than 300 compositions have been made for Matthijs, mostly dedicated to him: solo works, in chamber music, with organ, as part of ensemble and solo concerts. Often by composers of renown such as: Theo Loevendie, Roderik de Man, Daan Manneke, Guus Janssen, Klaas de Vries, Chiel Meijering, Gwyn Pritchard, Fabio Nieder, Calliope Tsoupaki, Martijn Padding, Klas Torstensson and Ron Ford.

As a soloist Matthijs performed with the Radio Philharmonic Orchestra, I Barocchisti, Sinfonietta Riga and Ensemble Oxalys. He played in venues such as the Concertgebouw, De Doelen and Carnegie Hall.

“The sound of the pan flute fascinates me,” says Koene. “The instrument is very expressive because of its many color possibilities and dynamic range. I am convinced that technically and therefore musically there is much more I can do than I now imagine. I like to research that. Thinking up solutions, making theoretical thoughts sound.
The pan flute can play a role in the classical tradition. I am convinced that this can mainly be realized by building up an autonomous repertoire, namely fantastic compositions in which the pan flute plays a prominent role. But also by simply performing repertoire for other instruments, such as the flute sonatas of J.S. Bach.”

“Koene does things with his instrument which sounds quite impossible at times.” (Soundboard Magazine, 2010)
“Koene is now widely recognized as an absolute master of his instrument.” (Classical Affairs, 2010)
“The panpipes soloist aims to establish the panpipes as a classical instrument in its own right. He has achieved this with expressive virtuosity, and is technically perfect.” (Berner Zeitung, 2009)

Vriendenkrans, Concertgebouw Prize and AVRO Radio Prize (2003)
Prize for contemporary music from the Comradio competition in Barcelona (2003), with Verso
IBLA Grand Prize Top Winner Award and Piazzolla Award in Italy (2006), with Verso
Final places in ‘The CAG music competition’ in New York (2005 and 2006), with Verso