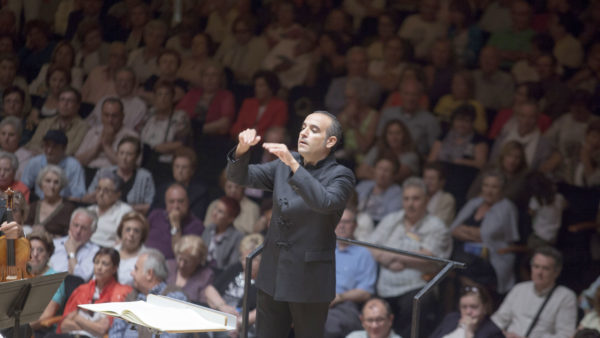 A renowned specialist in Spanish opera and symphonic music, Martínez Alpuente has been celebrated by the press as having “taken the lead in the genre through meticulous precision”.

Born 1976 in Valencia into an artistic family of several generations, Martínez Alpuente was enrolled in the Conservatorio Superior de Música “Joaquín Rodrigo” de Valencia at the age of 7. He later studied conducting at the University of Valencia, the Arts Academy de Roma with Bruno Aprea, as well as the Accademia Chigiana di Siena with Gianluigi Gelmetti. After further refining his skills with Vladimir Ponkin in Russia and his principal mentor, the American conductor George Pehlivanian, he served as assistant conductor with Spain’s National Youth Orchestra.

In addition to commanding a well versed classical repertoire, he is known for his distinguished musical skills coupled with a pronounced creative drive that has led him to found the Spanish Opera Festival of Valencia as well as the International Academy of Music City of Valencia (AIM). He is particularly committed to the revival of mid-19th to early 20th century Spanish music. One of his most illustrious and ambitious undertakings is the “Chavarri Project”, through which he has been uncovering, editing and interpreting the entire orchestral catalogue of the Spanish composer Eduardo Lopez-Chavarri (1871- 1970), a task involving meticulous research through the composer’s manuscripts.

His concerts have been broadcast by the Spanish Radio-Televisión (RTVE) and the Valencian Radio- Televisión (RTVV). In 2009 and 2012 he conducted the finals of the prestigious Spanish guitar competition Francisco Tárrega Benicassim.