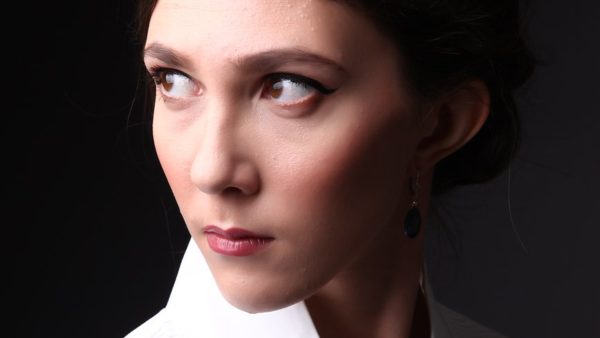 Lara Poe is a Finnish-American composer who is currently based in London.  She has worked with musicians such as London Symphony Orchestra, the Jaerensymfoni Orkester, the JACK quartet, the Semiosis Quartet, Kalle Hakosalo and Duo km2, Duo Cello Jaya, Laura Farré Rozada, Aija Reke, Jonathan Radford, and the Megalopolis Saxophone Orchestra.  Her works have been performed across a wide range of venues, including LSO St. Luke’s, the Dimenna Center in New York, Ozawa Hall and the Linde Center in Tanglewood, Helsinki’s Musiikkitalo, Brahms Saal of the Musikwerein in Vienna, Snape Maltings, and the Sala Thalia in Sibiu, Romania.  This September, Poe will have a piece performed by the Lahti Symphony Orchestra with Dima Slobodeniouk conducting, as part of the Lahti Symphony Orchestra Nursery Garden Initiative.  While taking part in this project, Poe received mentoring from Sebastian Fagerlund.

Poe began her studies at the New England Conservatory of Music Preparatory School, studying with Rodney Lister, although she moved to Finland for a few years and studied with Paavo Korpijaakko while there.  She then studied with several teachers – Martin Amlin, Richard Cornell, Joshua Fineberg, Alex Mincek, and Ketty Nez, during her undergraduate studies at Boston University.  Following her bachelor’s studies, Poe received a master’s degree with distinction from the Royal College of Music, London, where she studied with Kenneth Hesketh, after which she also pursued an ArtDip at the RCM, studying with Hesketh and Simon Holt.  This Autumn, she will begin doctoral studies at King’s College London under the supervision of Sir George Benjamin and Silvina Milstein.

Poe has received recognition in several competitions, most recently receiving the Theodore Holland Intercollegiate Composition Prize in 2020.  In 2017 she was the first female winner of the William Schuman Prize in the BMI Student Composer Awards, and in 2016 Poe won the American Prize in Chamber Music Composition, Student Division.  While studying at Boston University, Poe received both the Wainwright Prize and the Department of Music Theory and Composition Award.  She was also inducted into the honor society Phi Kappa Lambda.  At the RCM, Poe won the RCM Concerto Competition in 2018 and her orchestral piece Taivaanranta was subsequently performed at the RCM Amaryllis Fleming Concert Hall, conducted by Martin André.

Poe received the Patricia Plum Wilde fellowship to study at the Tanglewood Music Center in 2019 and represented Finland at Ung Nordisk Musik 2019 in Piteå.  She was also a 2018-2019 participant in the London Symphony Orchestra’s Panufnik Scheme, where she worked under the guidance of Colin Matthews and Christian Mason.  Earlier engagemnts include participating in ICon Arts’ residency in Transylvania in 2018 with Joshua Fineberg, and taking part in the Britten-Pears Young Artist Programme with Oliver Knussen and Colin Matthews in 2017.

Current engagements include a commission for the Flux Quartet, to be performed at the Santa Fe Chamber Music Festival in August 2021, and a virtual piece for the summer festival Zfest, which will be premiered over August 1-2, 2020.  Poe is also an Illuminate 2020 Season I composer, and her piece Mainspring for saxophone and piano will be performed in a number of concerts throughout the UK over the course of 2020.